There are many things in this area that we can be proud of, but sometimes, as in most things in life, exceptional things pass us by.

We walk past facilities we ought to be rejoicing about. And, far too often, we take a number of points of interest for granted.

Take for instance a local art college which many people know of as an associate of a much grander name: University of the Arts London.

As followers of culture and the arts, the fact that this institution is overlooked (unless you study there) and, slept on by its direct neighbours i.e. us, is a sad inditement to their hard work.

Rejoice then, at the current exhibition, The Olympics Drawn at the venue, Wimbledon Space.

Two months ago we tweeted pictures of their Masters show, which featured last years’s theatre, digital and drawing students. It was a humbling experience to see youthfulness in it’s element: brave and unabashed. And, creatively stepping into tomorrow’s world with their openminded vision.

This limitlessness was plentiful, as the current exhibition included a Study Afternoon, which was chaired by Ms Angela Brew. The panel included; Kevin Owens, the Design Principal with the London Organising Committee of the Olympic Games and Paralympic Games, London 2012; co curators Dr Joanna O’Hara, post doctoral research fellow and Professor Stephen Farthing.

Their journey to this point was a long one. Professor Farthing worked with Dr O’Hara from 2009, and Kevin Owens had been involved with his partner since 2002. As a panel we had before us a wealth of experience on the art of drawing and they revealed to us the arduous steps it took to bring about these collected gems.

Professor Farthing said that when they initially looked for distant points of reference that they were told, “there were no drawings”. They then found pieces from 2002. In fact so remote had their research been, the British Olympic Association said that what was needed, was an archivist, “someone who could collect these drawings”. Tania Kovats said, “the rhetoric throughout was of the lasting legacy..it’s strange that you should have to go through so much effort to gain information”.

Besides the great deal of work that went into finding these drawings and researching the little that was archived of previous Olympiads, we were in awe at what was before us. 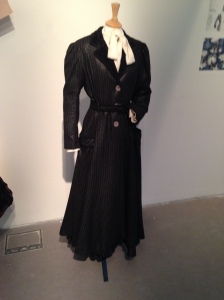 On display is the Mary Poppins costume , incased in cabinets (borrowed from the Royal Academy of Arts) are drawings of ‘Movement Charts for the Opening Ceremony & Design Charts’, sketchbooks, animatics, storyboards for the Queen/James Bond film sequence and also background designs by the director Mario Cavalli. Honourable mentions must go too, to Tania Kovats, course Director for MA Drawing at Wimbledon College of Arts, and Damien Duggan, for their insightful explanation on this epic contribution to the London Olympics 2012.

We’re fast approaching the end of it’s run (geddit?) as it finishes in a week (14th November). So, on your mark, get set..